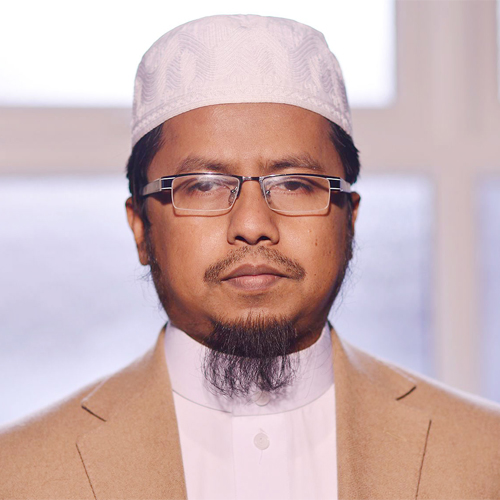 Shaykh Mahmudul Hasan Renowned British-Bangladeshi Muslim scholar and media personality. He is One of the pioneers of the Preaching of Islam in Britain. Also he is well-known as a prolific writer-researcher and analyst.

He is currently the Grand Imam-Khatib and Principal of The Essex Jame Masjid and Academy in Southend-on-Sea, London. He and his comrades-in-arms were caused a stir by the purchasing of United Reform Church in 2006. Later he played a major role in the formation of the Islamic Complex there. He is also Director of TV One UK, a popular satellite TV channel across Europe.

He traveled around the world with education, theology & socio-philosophy and the glorious message of Islam. Participated in international seminars and symposiums in different countries.

He was born in an aristocratic Muslim family in Hinguli, Mirsarai, Chittagong, Bangaldesh. He is the eldest son of Haji Muhammad Ilyas and Laila Akhtar.

In 1993, he finished his Dawraye Hadith (Takmeel class) from Befaqul Madarishil Arabia Bangladesh (Qawmi Madrasa Education Board) with first class first and got record number of marks in the whole country.

He holds B.A. & M.A. from the Department of Arabic and Islamic Studies in Chittagong University. In both the exams he got first place in the first class.

He also received a Bachelor's degree from the Faculty of Islamic Theology from the Al-Azhar University, Egypt. He completes a Post-Graduation Diploma on Islamic Philosophy at Cairo University with a government scholarship.

He started his career as teacher at Al-Jamia Al-Islamia Patiya, one of the most reputed Islamic schools in the country. About eight years he served as a senior teacher in that institution.

On December 5th 2000, he joined Department of Quranic Sciences and Studies of International Islamic University, Chittagong. He served there for three and a half years with distinction. Later became a lecturer in the Department of Arabic and Islamic Studies at the University of Chittagong on August 1, 2004.

He received another master's degree in 2006 from The Markfield Institute of Higher Education at Loughborough University in England, Later that year satrted his PhD at the Institute of Education in London.

Writing letter to newspapers on various issues, helped him developed the writing habit. A journey started there still moving along with  Many articles, Books and translations. Nowadays Shaykh Mahmudul Hasan is popular author, religious speaker & Instructor; got followers across the world.